Troops and form a powerful army to declare war on other guilds!

You can check the status of your army in this menu: 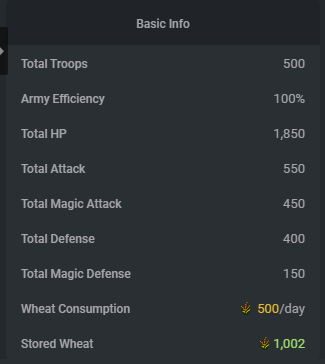 Wheat at 04:00am every day; The army will lose efficiency if it doesn't have enough.

If you have more than one troop type in the same battle line, the system will choose randomly 1 (one) of them to battle in the round.

Troops in battle will be visible in the battle screen and in the guild territory.

8 players found this article helpful. And you?